It almost makes Hamlet look silly. All his important internal struggle and angst, all his indecision, all the intrigues—how important everything within the palace seemed, to him and to everyone else involved. But all the time, they had no idea. They were focused on the wrong thing. The audience is left wondering—if they had shifted their focus and put aside internal grievances to make Denmark strong, what would have happened? If they had faced the actual, bigger threat of Fortinbras’ army instead of being distracted by internal turmoil, what would have happened?

Not to say the murder of Hamlet’s father and the grief and betrayal therein isn’t legitimate–but I also think survival is legitimate. That’s the problem with the trees you get distracted by–they’re all legitimate, but at what cost?

You can imagine what a viewing experience this was. My entire idea of this play was turned upside-down; the obsessive Fortinbras shots I at first thought strange and unnecessary, I soon realized were an insightful interpretation. That perhaps the inclusion and role of Fortinbras is not a plot convenience or odd loose end—perhaps it is a very subtle placement by the Bard, a very subtle point for his readers.

It is one of the tragic flaws of we, as a human species, to focus on the wrong things. We focus on the small bad in our lives instead of the huge good. We focus on internal concerns in a family, organization, or even country, at the peril of being a strong and successful whole and facing often greater external threats. We miss the forest for the trees.

Perhaps Hamlet’s tragic flaw is not, as many say, indecision. Perhaps he, and his entire country, were putting their energy towards the wrong things—self-destructive quests that destroyed everything around them.

What do you, oh reader, think about all of this?

Hello! Why don’t we return to one of the old guard for this month’s posts—the Bard.

I believe it was Mortimer Adler that read Hamlet over again every year, gaining new insights with each look. You could say society is in the same bucket; new adaptations of this play focus on different things, and different waves of academics bring out one theme or focus, only to be surprised by a later insight from a different voice, highlighting another aspect of the story.

Kenneth Branagh’s adaptation of Hamlet did that for me. Here’s the backstory:

I’d read this play once before, and was reading it again this year for Literature. I’ve recently enjoyed indulging in adaptations (studying something is an easy excuse), and as you all have seen I’ve gone rather wild with Wuthering Heights. So I watched Branagh.

Reading Hamlet, I found Fortinbras a rather odd thorn. Perhaps a loose end. The arrogant, power-hungry Norwegian prince who conquers Denmark in the end. What was he doing there? He wasn’t in the story enough to really contribute to thematic significance, and his entrance at the end is almost random and seems quite the convenience for our esteemed author. However, Branagh gave Fortinbras more of a presence in his adaptation. Fortinbras already was sprinkled throughout the beginning of the play, but Branagh gave him more wordless shots, flashbacks, and made it always ominous. The viewer is definitely more aware of the threat he poses to Denmark, and of the dramatic irony that the Danes have no idea.

As the film progresses, so does Fortinbras’ looming figure. Branagh highlights the huge scope of the threat during one of Hamlet’s soliloquies as the camera zooms out, leaving Hamlet a speck before Fortinbras’ enormous army (which Hamlet has no idea is actually marching to Denmark).

Act 5 is the most marked difference of all. While in the play, Fortinbras only appears with his entrance at the end, his approach is frequently shown by Branagh, heightening the peril. The audience is agonizingly aware that, the whole of act 5, Fortinbras is swiftly taking a defenseless Denmark—and, again, Hamlet and crew have no idea. The action of act 5, the duels, the poisonings, that seem in the script so all-consumingly important, are constantly juxtaposed with shots of the massive approaching army. In Branagh’s version, Fortinbras is of as great importance, if not more, than the intrigue within Denmark.

Look out for the next installment, up later this month!

Now what you probably expected here was a sewing project. Right? I mean, I’ve sewn clothes, why not wallets too? I have sewn some, actually. But this isn’t about them.

When I was eleven my mother bought me my first (and current) wallet at a toy store. It was bright green, very durable, and covered with bugs. It went to Japan with me, it goes to classes with me, driving, paying for lunch, whatever I have to do. Still have it. 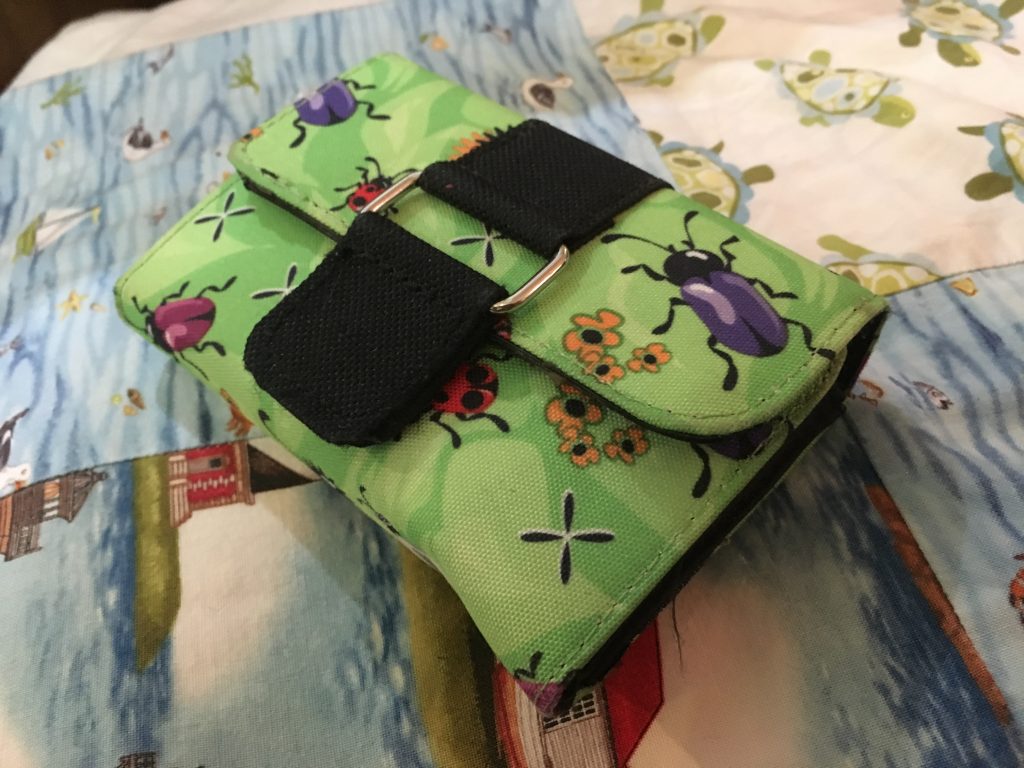 My mother thinks my wallet is the goofiest, most bizarre thing. I still don’t entirely understand this; it doesn’t seem goofy to me. Everything in it makes sense.

It is full of the faces of the people I admire most as reminders, a Shakespearean insult, wonderful quotes, found poetry from Lord Alfred Tennyson, and a fortune cookie message. It makes perfect sense to me! What better place to stash special things than something small you carry around with you most of the time? 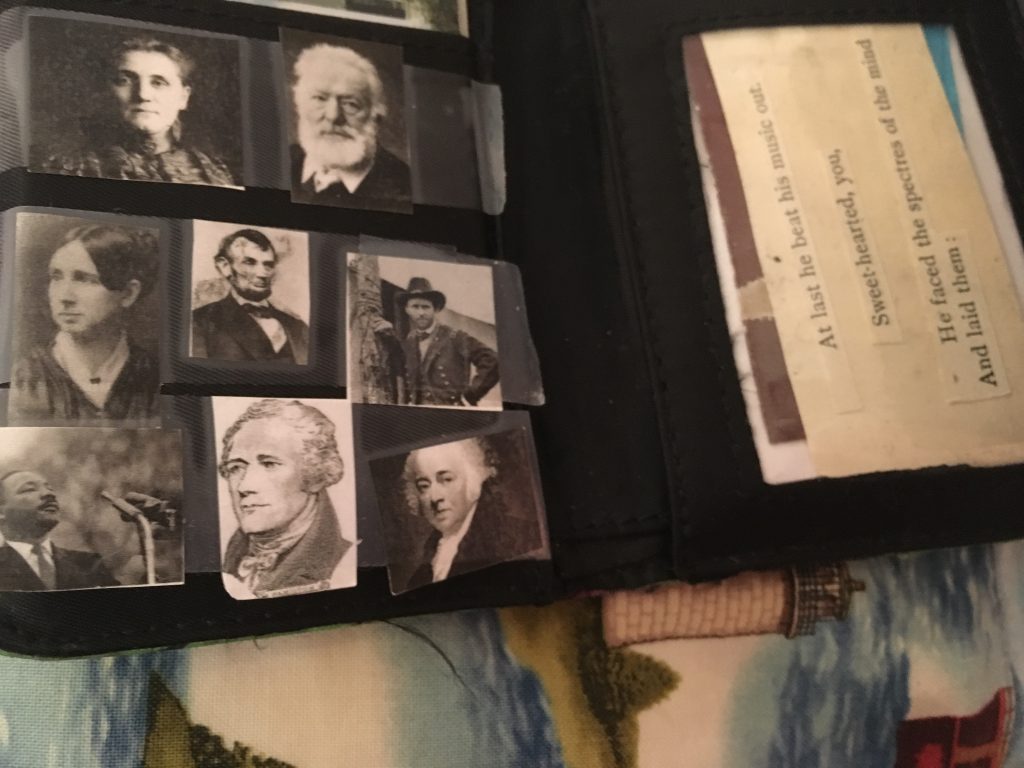 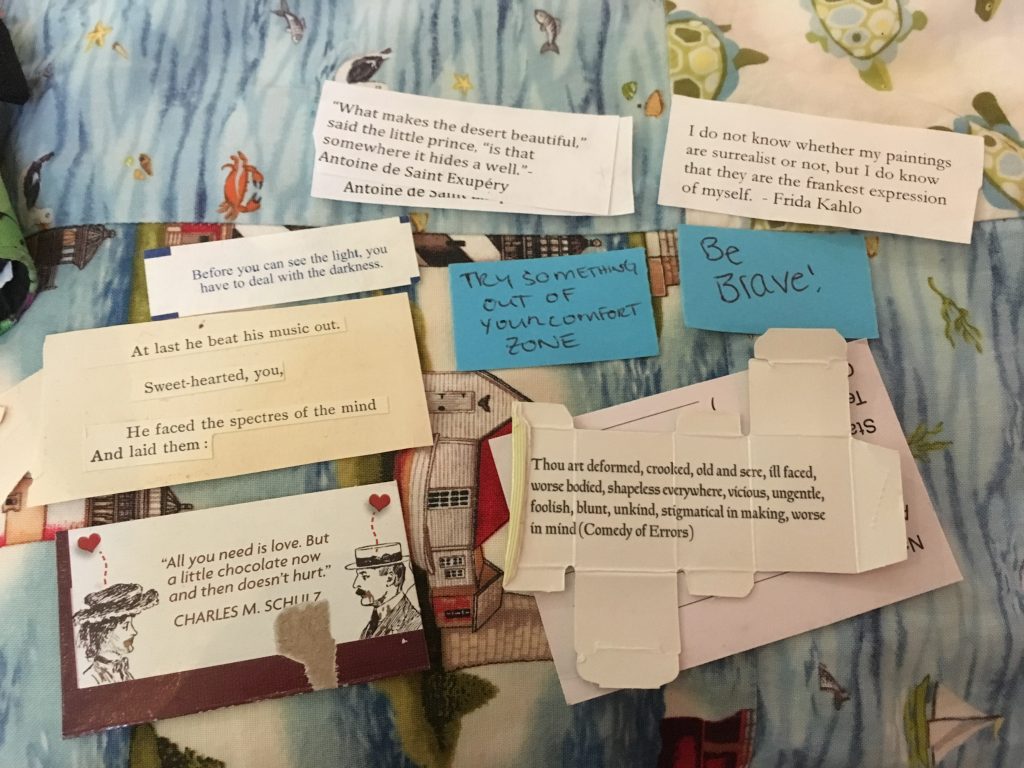 The only problem with this wonderful system is that I stuff too many things in my convenient see-through slot for the wallet to do its damn job—I can’t even fit my ID card in anymore.

So, without further ado, here are some of the items it exhibits:

For the scoop on the faces, tune in later this month!

Do you have anything special in your wallet?