These will often be projects of art, writing, or costuming inspired by some book far greater than I.

This month, for January, it is inspired by Shakespeare’s A Midsummer Night’s Dream. This is not the norm for these posts, but this was actually a final project for a class. I have designed costumes for most of the characters, along some timid set designs and stage directions, etc. It is basically just my imagining of the play, if I were putting the thing on myself.

I hope you enjoy!

Notes on the General Feel of this Adaptation:

The idea is a sort of dreamy story-land. Although the fairies are very different from the humans they are constantly seen with aspects of the human world (books, iced tea, patchwork) because they are part of it, just like the humans are part of theirs. Books are a big theme in the set, as the whole idea with the fairies is that they’re connected to the humans by stories in the background. Overall it is rather being presented as Theseus’ dream (discussed later). 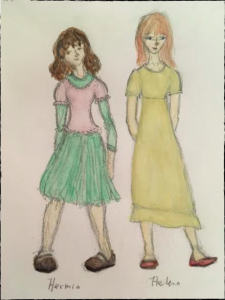 Hermia is visibly shorter than Helena–she is more low-to-the-ground, Helena is taller and thinner. Hermia’s costume is as follows: the basic piece is a mint-green dress, a sort of chiffon feel, with a knee-length skirt prone to furling out beautifully and tight 3/4 sleeves. On top of this she wears a knit pale-pink shirt with furled edges that clings tight but it really quite comfortable due to the knit nature of the fabric. She also wears dark Mary Janes, and has rather short dark brown curls for her hair. The clothes must look appropriate for the season (i.e. summer). She escapes with Lysander with her cello case on her back (ostensibly with a cello inside), and a brown paper bag of cookies. In the scene where she meets Demetrius for the first time in the woods and chews him out, thinking he’s killed Lysander before storming away she drops her cookies (perhaps she pushes Demetrius of something, which causes her to drop them), before tromping off and a rather bemused and disappointed Demetrius is left munching on them in her wake. She does manage to keep the cello case with her (one would hope she would), and swings it at Helena as a weapon as the fight scene between the two later in the play escalates.

Helena is taller than Hermia and thinner. She wears a cream summer dress, empire waist and it is not frilly as Hermia’s things are, and when there are borders or ends they are flatter. She wears reddish ballet flats that complement her hair, which is longer than Hermia’s, more straight, and a bit of a strawberry blonde. Helena and
Hermia wear matching friendship bracelets that should be visible in at least some of the scenes. 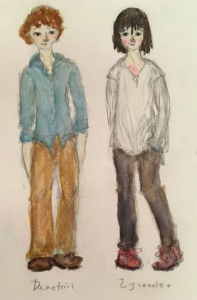 Demetrius has light brown slacks, and a light blue collared shirt with sleeves rolled up 3/4. He has brown curly hair (lighter than Hermia’s). The important thing here is that Demetrius isn’t a bad guy (although it certainly seems that way in the play’s beginning). He is more stubborn than Lysander but he is also more moderate, as shall be discussed below.

Lysander is far more passionate than Demetrius in just the way he lives his life, and this is evident in his clothing. He wears a white shirt, of a much looser and romantic nature, and his pants are darker and not loose as Demetrius’, more form-fitting. His hair is darker, straighter, and longer than Demetrius’, and his whole aspect is one more romantic, while Demetrius usually comes off as sterner. He swings around all over the place emotionally–it’s important to note when looking at their characters that in the big fight scene between the four lovers, when both Lysander and Demetrius are under the same magic spell to love Helena, Lysander insults, threatens, and would hurt Hermia at this new (albeit magic) passion towards Helena, while Demetrius, under the same spell, does no such thing and asks Lysander to leave Hermia alone. Hmm. Interesting. 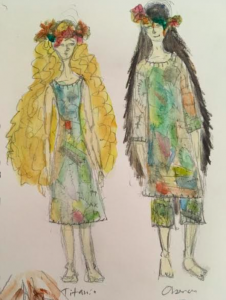 They wear clothing made of patchwork–Titania a simple dress, Oberon a tunic and short pants. This is not shabby patchwork, however–it is fine and carefully put together, it’s not dirty. They also each have quite the head of hair–Titania wild golden curls, Oberon long dark locks. They are both crowned with a band of thick, wild flowers. This next part is not my original idea, but I read a summary of an article in the back of the Folger’s copy of this play that suggested the idea of Titania and Oberon being played by the same actress and actor as Hippolyta and Theseus. The idea here is framing the play more as Theseus’ dream (the crazier parts, mostly) that expresses his desires and anxieties as his wedding with Hippolyta fast approaches. I really like this idea and feel like in my adaptation this would be how it would be played. It was called “A Midsummer Night’s Dream: Anamorphism and Theseus’ Dream.” in the Shakespeare Quarterly 42 (1991): 409-30 by James L. Calderwood.

I have not read the actual article myself, but the Folger’s summary caught my attention.

Although Puck is of uncertain age, he is certainly younger in appearance than the rest of the fairies. He holds a childish look to him and is impish, dreamy, and playful as well as mischievous. He has wild little curls, wears a bright yellow raincoat, and too-big stripy socks (unlike the fairies, who are barefoot). Puck is his own thing, he is not a normal fairy like the rest of them (technically he’s a goblin) but a mischief maker and lone wolf that goes off and has his own adventures (who happens to be Oberon’s henchman). Around his neck he wears a flat, round mirror. This adds to the mischievous illusion of Puck’s presence–it should be rather disorienting for the audience to be looking at him but then there’s a hole in his chest

with a reflection of the wild forest around him, or perhaps of the audience themselves. The possible cons of the mirror are two-fold: a., it hinders Puck’s agility. Puck’s freedom of movement is very important and if he finds the mirror hinders this, then it should be discarded. Also, if the other actors and actresses find it unduly distracting it should also be discarded, as Puck can stand without it. 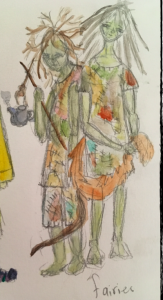 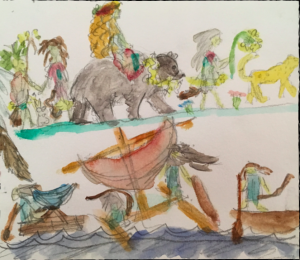 Wear patchwork clothing similar to that of Titania and Oberon. In contrast to Titania and Oberon, however, they are elderly in their appearance, and their hair is made of wildly sticks. They also have tails, and play the role the wild beasts Demetrius threatens Helena with in the forest (in that scene the audience can see the fairies on all fours with their tails, animal-like on the edges of the stage around Demetrius and Helena). Titania’s fairy procession is on land–interspersed with beasts played by fairies on all fours, lanterns, flowers, lights. Oberon’s takes its way by water–he rides a wild skiff, and his fairies follow in like fashion.

Here comes the end of part one! To find out about the Rude Mechanicals (and a few other things besides), stay tuned for part two!

What is your favorite work of Shakespeare? Mine might be Julius Caesar.